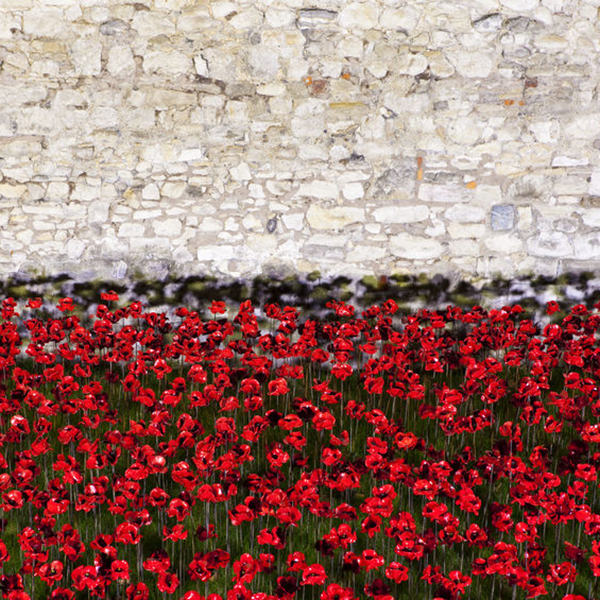 Poppies for Peace, Hope and Remembrance

This past week saw a powerful image and sobering tribute take hold of the city of London. A trench of ceramic red poppies slowly surrounded the Tower of London over the course of months, with the final poppy being placed last Tuesday on Armistice Day. It is an overwhelming sight to behold.

November 11th marks the anniversary of the signing of the armistice between the Allied Nations and Germany that ended World War I. In the United States it has become Veterans Day and in other nations it is known as Remembrance Day, as the important anniversary has been expanded to include the heroes of subsequent wars. The conflict meant to be “the war to end all wars” may have passed long ago, but its memory still stirs deep emotions for many.

Great Britain entered World War I on August 4, 1914. Over the next 4 years they would lose 888,246 soldiers. The ceramic poppy exhibit, dubbed “Blood Swept Lands And Seas Of Red” has one flower for each of these men.

From time to time throughout our lives, conflict and tragedy strikes. Sometimes, memorials are created which can serve as powerful symbols to help bring hope and light to the times of darkness the memorial is intended to commemorate.

The effort involved to create this memorial is impressive, yet nothing compared to the sacrifices it was constructed to represent. We could allow it to pass by as a news item, a frame in a slideshow watched during a lunch break or a 30 second spot on the evening news. But instead let us seize it as an opportunity as chances to reflect and share what it represents.

The poppies are not just representations of men lost, but of hope. They represent hope for the future, hope for peace. They mark the perseverance and spirit of the men that inspired them to step up and defend their country and beliefs. They represent an ultimate sacrifice, but also an ultimate commitment to what they believed was right.

Many have made great sacrifices for freedom and for others throughout history. This is not limited to war but is woven into the very fabric of our society. This is a prime opportunity to discuss with one another what is important to us, and to reflect on what those who came before and sacrificed so that we may have these things. Discuss together your gratitude for these trailblazers and what you may do to improve the future for those who come after you.

We also wanted to share a related story, also about Great Britain and poppies. Sir Richard Branson and his Virgin Corporation. He recently created a competition to inspire child entrepreneurs called “The Fiver Challenge.” In it, young people were given just 5 pounds and asked to start a profitable business.

The young winners of the competition created a program called “Poppies for Peace” and sold small plants in biodegradable pots for people to purchase and plant in memory of World War I soldiers. It goes to show how young people can take to the idea of remembering and honoring the past and put their own spin on it. These children found their own way to express gratitude and spread a sense of community.

Please take the time to read these articles and discuss them together. This is a wonderful chance to remember the past in order to gain context for the present, and promote hope for the future.