Home>article posts >The Big Dreams of a Young Chef 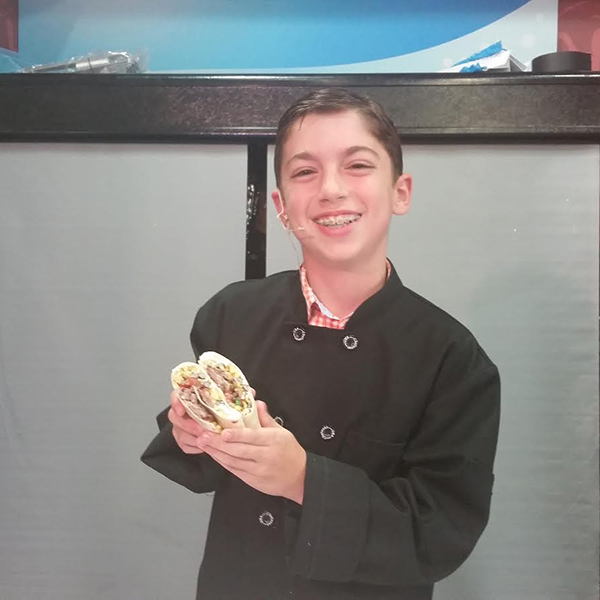 The Big Dreams of a Young Chef

Chef Eitan Bernath may only be 12 years old, but this seventh grader has already accomplished things adult chefs spend their lives and careers dreaming about. As one of the youngest ever contestants on Food Network’s Chopped, he has set a high bar for not only culinary skills, but for rising to meet challenges and pursuing his passion.

Julia Greenblatt, one of the co-founders of InspireConversation.com, had a chance to sit down with Chef Eitan for a video interview we are proud to share HERE. The video provides a glimpse into the life of a spirited young man who won’t let age stand in the way of starting his journey.

His message to other young chefs? “Even if you’re a kid, don’t think you can’t do things. Who would have thought a kid could be on the Food Network?” This message extends beyond the kitchen to any young person with big dreams. Don’t delay your pursuit of greatness, you just may surprise yourself with what you’re able to accomplish right now. According to Eitan, “a kid can still do all these things an adult can do, and maybe even better.”It’s this winning attitude that has the young chef booked solid through early 2015 with cooking demos. He isn’t content to rest on his laurels either. Even though he appeared on Chopped and he cooks at a level few his age could ever imagine to, he is still learning and has a voracious desire for new experiences and knowledge.

His other message? Follow your dreams, even if they fall outside of what others would expect from you. For other boys he says “don’t think ‘oh, I should like sports,’ if you like to cook, then cook!” It can be especially difficult for younger people to work outside of norms, and go beyond peer pressure that encourages them to do what is expected. Eitan is a terrific example of just how much there is to be gained, both professionally and personally, by following one’s heart. He shows a maturity beyond his years.

Similarly inspiring is his attitude that not everything needs to be about success and achievement in the most traditional sense. When talking about his idol, chef Guy Fieri, Eitan admires his sense of fun and the ease that he inspires in anyone that is in a room with him. When Eitan says that he wants to be like Guy, he isn’t focused on the money and the cars, but rather Guy’s ability to bring happiness to the lives of others.

Eitan also faces an interesting challenge for an aspiring professional chef: as a young Jewish man he conforms to kosher guidelines for the preparation and consumption of food. This means that certain ingredients, as well as certain combinations of ingredients, are off limits to him when he considers preparing a dish. Just don’t call it a limitation! Eitan sees this not as an obstacle, but as a worthy challenge that he feels makes him more creative in the kitchen. While not allowed by religious strictures to combine meat and dairy, he has found using a meat substitute like tofu, or ersatz cheese, can allow him to find new ways to be creative. In this way he stays true to himself and his values, while still pushing the boundaries of what he can do in the kitchen. We are sure this attitude will take him far.

In fact, the young chef has big plans to create kosher versions of dishes that don’t necessarily lend themselves to kosher preparation. First on the chopping block? Biscuits and gravy. By substituting ingredients and experimenting with techniques, Eitan may be able to open up a dish like this to family, friends and other members of a community who normally would not have been exposed to them.

The ambitious young chef’s philosophy is “If you can make it home, make it!” Not a fan of buying ingredients he can prepare himself, Eitan has taught himself to prepare things like cheese, tortillas, dough and ice cream all from scratch. A great testament to his cooking skills, this also seems to be a motto apropos to the young man’s success: Eitan’s achievements are far from prepackaged themselves.

This young chef proves to us all that with hard work, dedication and an attitude of not letting anyone tell us what we can’t do, we are all capable of great things. To children and teens he further demonstrates that everyone is capable of starting the road to these things today. Don’t delay your passion, your happiness or your success. Take an active role in your future and reach for the stars.

To learn more about Eitan’s process, his food and his various projects visit www.cookwithchefeitan.com We thank Eitan for his time and his wisdwom, and wish him many more great things in the future.