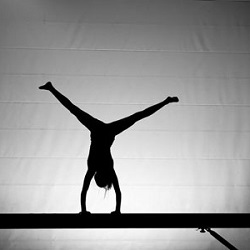 Lessons Learned from a Blind Gymnast

How many times have each of us run into a situation in our lives where we decided that moving forward with a particular task was too difficult, or even impossible, and perhaps decided to give up on what we were trying to do or accomplish? Quitting is always the easiest way out, but it gets in the way of opportunities to grow and chances to discover just what we are truly capable of. Today we share the story of an inspiring young girl who not only keeps moving forward in the face of adversity, she moves up, down, sideways, and beyond.

Adrianna Kenebrew may only be in the 7th grade, but she has already accomplished so much. When Adrianna was born, her parents noticed something was wrong. She cried excessively when taken out into sunlight, and her eyes lacked any distinct color. While her family all had brown eyes, Adrianna’s were more grey in color. Doctors diagnosed her with glaucoma.

This disease of the eye has left her nearsighted and almost without peripheral vision. She squints hard in direct sunlight and sometimes uses a cane to walk. She uses three kinds of eye drops a day and has lost track of how many surgeries she has undergone in her young life, though she estimates it is somewhere around 13 or 14. Glaucoma can be managed with current medical science, but it cannot be cured.

Rather than let her glaucoma stop her from pursuing her passions, Adrianna took up what sounds like an unlikely hobby for someone who is legally blind: gymnastics. She started 4 years ago, and has already shown a real talent for the demanding physical activity. While she may need a magnifying machine and a special lens to help her see schoolwork and teachers, she competes in gymnastics with nothing more than a few auditory cues from her coaches.

“The gym is one of the only places where there are no real accommodations for her. Everything is the same. She gets on the same balance beam as everybody else,” said her mother. Adrianna competes just the same as everyone else, with coaches simply calling out to let her know when she is nearing a vault or balance beam, and indicating which way she should face to bow before the judges. Competing on an equal footing with her peers is a very valuable experience for Adrianna, who does not want special treatment. She wants to prove that through her hard work and practice she is just as capable as any sighted gymnast.

All that hard work is paying off. In 2013, Adrianna was named Female Athlete of the Year for her region. She hopes that one day she can be an Olympic athlete, the first visually impaired gymnast to win a gold medal. She says that there is nothing she would change about her life – she has no ill feelings about being blind, as it pushes her to work harder and be the best she can be.

We can all draw inspiration from Adrianna’s story, which you can read more of here. Use her story as an example of how our limitations, real or perceived, don’t have to hold us back from our dreams.