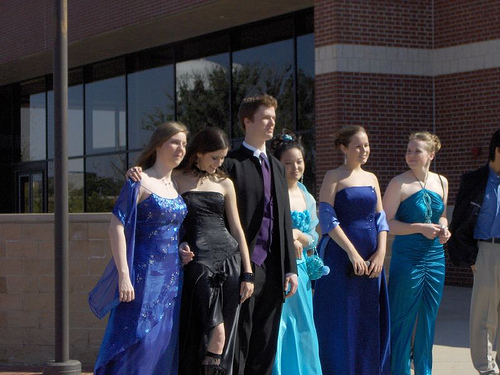 Recently in Fort Lauderdale, Florida some Prom-bound teens took a detour in order to help car crash victims. This selfless act was extremely heroic yet the teens seem to think their actions were unremarkable.

Twenty Western High School seniors were all riding together in a Cadillac Escalade limousine on May 11, 2013 when a Honda Odyssey in front of their vehicle lost control and flipped over. Passengers in the upside down vehicle could be heard screaming and crying, and the driver of the limo pulled over and jumped out.

All twenty of the Prom-bound teens jumped out to help, and the glamorous prom gowns and tuxedos that they were wearing did not stop them at all. Instead the students sprang into action, and their deeds are nothing less than heroic. The teens never thought of their own safety or any inconvenience that a delay might cause.

One of the students wearing prom apparel climbed onto the top side of the crashed vehicle, and then started to help remove passengers from the crumpled vehicle and the broken glass. The passengers were bloody, injured, and confused, and some were children including a small child who ended up stuck underneath the seat of the vehicle. Once the police, paramedics, and firefighters arrived the teens were finally able to continue on with their journey to prom. Until this point the students tried to keep the passengers calm and offer reassurances.

The Prom-bound teens who helped to rescue the victims of the car crash were rumpled, wrinkled, and even bloody by the time they arrived at the prom. The teens all say that they would do it all over again, and that they have no regrets about their actions. The rest of the students who attended the prom were very understanding, and they even helped the rescuers clean up and put their best face forward.

The students involved do not think that they were heroic, or that what they did was anything special. This fact alone shows that the teens are heroes. They did not think about their planned activities or worry about their own safety. These students risked a lot in order to help others, and that is quite refreshing in modern society.

Some questions to ponder and answer are shown below. Scroll down to the bottom of the page to post a comment.