Winning by Too Much? 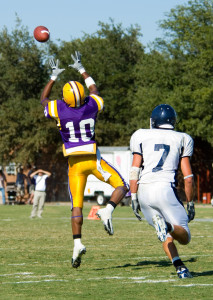 Last week, at the end of the Texas high school football game between the Aledo Bearcats and the Fort Worth Western Hills, the scoreboard read “Aledo 91 – Fort Worth 0”.  Athletes and parents of the losing team were forced to handle their disappointment and embarrassment, and each did so in different way.

One dad from the losing Western Hills team was so upset that he filled out the local district’s online bullying form, and accused the Aledo football coach, Tim Buchanan, of bullying.  The next day, SportsIllustrated.com and ESPN.com each had a description of the game and the bullying report as their front-page story.

The bullying report stated that the winning Aledo players exhibited exemplary sportsmanship, but that it was the Aledo coaching staff that was to blame for not slowing down the game and making sure that the score didn’t get too high once the win was well in hand.  At halftime, when the score was 56-0, Aledo coach Tim Buchanan decided against having his offensive unit take a knee on their possessions, which would have resulted in Aledo scoring no more points and handing the ball back to Fort Worth.

Buchanan countered by saying that he did remove most of his starters from the game at halftime.  In the second half, his second and third team received the lion’s share of the team’s playing time.  In addition, Buchanan said that he knew that he would be facing tougher teams in the games to come, and that by having his players continue to run plays, he was making sure that his team would stay sharp.  In addition, Buchanan thought that the second half would be a chance for his backups to shine.  “I can’t tell the backups not to play hard,” Buchanan said. “They’ve worked their tails off all week. They’ve lifted weights in the offseason. I’m not going to tell them not to play.”

Interestingly, Western Hills coach John Naylor, whose team dropped to 0-7, said that he had no problem with the way that Aledo and Buchanan handled the game, and he instead wanted to focus on what his team could do to improve.