Home>article posts >Would I Speak Up if I Witnessed This in the Supermarket (or anywhere else)?

Would I Speak Up if I Witnessed This in the Supermarket (or anywhere else)?

Common Decency: Is it a thing of the past?

Would I Speak Up if I Witnessed This in the Supermarket (or anywhere else)?

My wife came in from shopping the other day and she had an interesting story to tell. 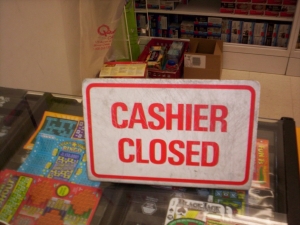 Is common decency a thing of the past? Source Flickr. Photo by PinkMoose

Apparently the store only had two lanes open with cashiers ringing up orders, and both had a long line and numerous customers. My wife stated that the lines had been at a stand still for around 8 minutes and the cashier in my wife’s checkout lane was having a difficult time with the order she was working on. The woman who was standing in line behind my wife became very rude and starting shouting that a manager was needed, insisting that the store open more lanes in order to speed things up.

Over the next few minutes the rude woman became even louder, and my wife felt that the woman was trying to bully and humiliate the cashier. Everyone in line could hear the customer and seemed embarrassed, looking down or away in order to avoid confrontation or becoming involved. The rude lady continued to escalate the situation, and each sentence was meaner and more aggressive as she continued. This customer was so loud that she became impossible to ignore and the poor cashier did not seem to know how to defend herself from the verbal barrage that the customer was shouting.

When a manager came over to my wife’s lane, the manager tried to assist the cashier with her problem instead of having another lane opened. The woman who was being loud and aggressive started berating the manager and the cashier in front of everyone in line, without any concern that she was being insensitive or inappropriate. She threatened to call the store corporate headquarters and continued to be extremely rude, even after the cashier and manager resolved the problem and the line started to move.

As my wife was about to say something to the lady, another customer spoke up and told the woman that “you can’t talk to people like that” and attempted to stop the harassment. This compassionate woman understood that the store employees were trying their best to fix the problem and that the rude lady was in the wrong; she decided to do the right thing and speak up in defense of the employees. This was probably not an easy decision but was the right thing to do, and the woman had decided that there had been enough bullying. All it takes is for good people to stand by and do nothing for rudeness to escalate, and this was evident in the way that the rude customer acted until someone else spoke up using common decency.

This incident led my wife and I to discuss the issue with our 6 children, and to reinforce the value of common decency and courtesy to others.  We would like to hear your thoughts.

[Publisher’s note: this blog sparked a pretty spirited debate with my family. We tackled different scenarios such is what if the woman had yelled racist or other words of hate; what if the cashier was a friend or family member, what if the woman who yelled appeared mentally unstable…]