Home>article posts >Is It Ethical to Pay Doctors to Promote Drugs? 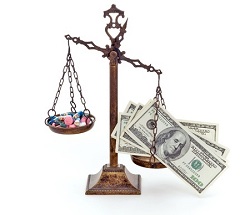 Is It Ethical to Pay Doctors to Promote Drugs?

A recent article brings to light a fascinating ethical quandary that is perfect for family discussion. Ethical questions rarely involve black and white answers, and can hide in almost any area of our lives. From the way we make and spend money, to the way we interact with other people, highlighting the ethical nature of certain decisions for children equips them with an important lens through which to live their lives, a point of view from which morality permeates their every thought and action.

The question at hand today involves the relationship between prescription drug makers and the doctors who prescribe prescription drugs. A particular case study involves a new drug used to treat macular degeneration, a relatively common malady in senior citizens. Ophthalmologists treating the disease had been widely using one drug, available for about $50 a dose, as a standard treatment. While this drug is actually a cancer treatment, its ability to combat macular degeneration was sound and reliable.

The same company which manufactures that drug then released a new drug, created specifically for macular degeneration, that retails for about $2,000 a dose. According to the article, studies have shown no significant difference in results between the two treatments. New drugs are incredibly expensive to develop and market, and require a lengthy testing phase. The drug company which had developed both drugs needed to sell more of the new drug to increase profits and pay for the development phase, research, and marketing of the newer, macular degeneration-specific drug.

What followed was a significant increase in sales for the new drug, despite its $2,000 price tag. Medicare footed the majority of the bill, with billions of dollars of taxpayer money going to subsidize medical treatments involving the newer, more expensive drug. A detailed look at statistics revealed that the relatively small cadre of doctors who had done the majority of prescribing related to the new drug were paid consultants for the drug company that developed both drugs. They received thousands of dollars a year to provide certain services for this company.

The money paid to doctors by drug companies is not an explicit quid pro quo in exchange for prescribing the drugs of choice of certain companies. These are consulting fees, as well as compensation for speaking engagements, travel, and other public appearances. At the same time, “specialists who study conflicts of interest between physicians and the drug industry say even modest payments have been shown to influence behavior.”

Some of the doctors who heavily prescribed the more expensive drug, while also receiving consulting fees from the drug’s maker, explained that they were doing what they thought was right. They said that their speaking engagements were aimed at educating their colleagues about the benefits of a drug (the more expensive one) that they really believe in, and that they prescribed the newer treatment not because of any financial incentive, but because they truly believed it to carry fewer risks to their patients.

We cannot say what goes through the head of a particular doctor at the time they decide to prescribe a certain drug. The question is whether or not the relationships between doctors and drug companies invite any sort of unethical behavior.

Read the full story and discuss its implications with your family. Decide for yourselves how you feel about drug companies paying doctors for consulting services, and how doctors might do their part to insulate their decisions from financial influence. Is paid promotion an inevitable part of our system that we need to learn how to work with, or something the next generation of professionals should try to avoid?