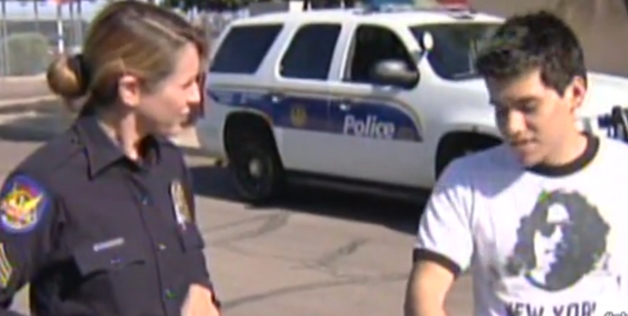 For AZ Teen Hard Work and Dedication Pays Off

Hard Work and Dedication. Christian Felix is an 18 year old teen whose life has not been easy, yet his hard work and dedication should be an inspiration to teens and adults around the globe. 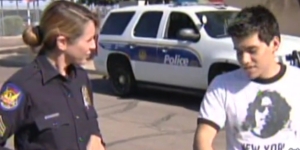 On March 6, Christian was walking home from his job at a local fast food restaurant, because he worked late and then missed the bus as a result. When Sargent Natalie Simonick of the Phoenix Police Department came upon Christian she stopped to find out why the teen was walking alone so late at night and in such a desolate area.

A quick check showed that Christian had no police record and no previous violations, so Sgt Simonick offered him a courtesy ride after learning about the teen’s situation, since he was still quite a ways from home. During the ride she found out that Christian frequently walked more than 6 miles to and from work, and that the teen had never learned to ride a bike and did not own one. Natalie was so impressed with the hard work and dedication that Christian showed that she discussed his situation with her husband, trying to figure out how to help the teen and reward him for his efforts.

According to Christian’s mother he grew up without a father or positive role model, and her work schedule prevented her from picking up the teen that night. As a single parent she tried very hard to provide for Christian and she worried about him when he had to walk. Sargent Simonick spoke with some of her fellow police officers about teaching Christian how to ride a bike, and her husband helped her donate a bike to the teen so he would no longer need to walk to and from work. The Traffic Department of the Phoenix Police Department donated the safety equipment, and several officers donated their time in order to teach Christian how to ride a bike and follow the safety rules in the parking lot.  Again, Christian’s hard work and dedication paid off, this time in learning to ride.

Christian now has an easier way to get back and forth to work, and his mother ended up in tears when she described her gratitude to the entire police department and especially Sargent Simonick. Natalie said she was moved by the initiative that the teen showed by walking more than 6 miles a day just to work and help his mother out. She also described being impressed by his character and principles, something that is not common in teens today.

Hard Work and Dedication Q & A

We’d love your feedback to this article about Christian Felix.  Also, please let us know how you would answer any of the following by leaving a comment in the comment box…