Home>article posts >The Simple Power of a Toothbrush 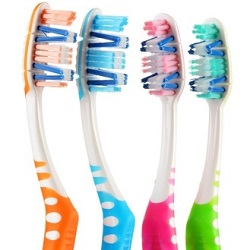 The Simple Power of a Toothbrush

Charity and giving are such important aspects of life. They enrich our every moment by expanding the world around us to include other people. The concept of giving can connect us with those a thousand miles away and bring us together not only with those we care about, but also those we have yet to meet. There are so many different ways to give back, and today we share a particularly creative example that shows that you are never too young to have the next big idea in philanthropy.

Paige Alenick is only a teenager, but she already has some big ideas about helping others. Just a few years ago, she had an “aha” moment while brushing her teeth. Coming from a comfortable home in a New Jersey suburb, it occurred to her that something as simple as brushing her teeth was a blessing, and one that perhaps she took for granted. She realized that “some kids can’t afford simple necessities like a toothbrush,” and she set out on a mission to change that.

She started soliciting friends for donations of toothbrushes, and her idea spread throughout her community. Before long, she was reaching out to dentists and dental suppliers, collecting as many toothbrushes as she could to send overseas to those who could make use of them. With the help of her father, she launched donateatoothbrush.com and has since received thousands of donations.

The site’s mission is simple – providing for the dental care of those who cannot afford such care on their own. According to their mission statement, “Almost everyone is aware of the hunger, poverty and general poor health of many children who live in third world countries. What we don’t think of is their dental health.” A toothbrush alone was far better than nothing at all. Even without toothpaste, a toothbrush and water can make a big difference in the health and lives of people living in poverty. She also discovered how closely dental health is tied to overall well being, and the major medical issues that can be prevented through proper tooth care. By providing these most “basic tools” of oral care, Paige and her supporters have been able to start children across the world on a path towards better health.

Once the toothbrushes are collected, they are sent on to World Dental Relief Inc., a nonprofit that distributes dental supplies and equipment to health-care missions across the globe. If you are interested in supporting the cause, you can donate to the organization online directly, support them through shopping on Amazonsmile,  or send your new, unused toothbrush as a donation to:

Paige, who has been involved in charitable work since the age of 7, serves as a powerful example of a young person doing all she can to help others. The thoughtfulness she has displayed in conceiving and building this charity shows that when we take the time to think of others, we will amaze ourselves with what we discover to be possible. Taking the time to put ourselves in other people’s shoes helps make the world a smaller place, and enables us to be forces for positive change.

To read more stories about giving back, many of them involving extraordinary young people, check out our Charity Channel.