Home>article posts >The Honesty Policy at the University of Virginia 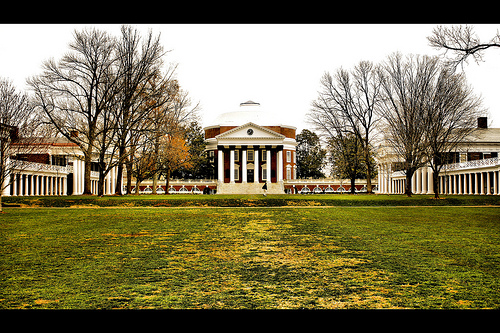 Awhile back I was attending the beautiful University of Virginia campus. While I was there, some students filled me in on their honesty policy. I was very impressed by what I learned.

Rather than a simple academic honor code, UVA’s code of honor reaches far beyond affecting just academia. The policy focuses on the character of an individual, and upholds the high moral standards of the community. Starting back in the 1840s, UVA’s students created an honesty policy, which has truly withstood the test of time. UVA’s students and faculty maintain their commitment to this policy; which shapes campus life, interactions, and the personal lives on a daily basis. The honesty policy states that students will not lie, cheat, steal, or in any way be dishonest in their dealings with anyone while attending UVA.

Because of this honesty policy, students enjoy greater freedom than students at many other colleges do. For example: Teachers at UVA are allowed to give standard in-class assignments and tests, but at their discretion, they may allow the student to do the work at home. The student swears on their honor that they have not received aid in the assignment, and that they took only up to the required amount of time to take the test. This is important, as it lets the students know that their teachers trust them to complete the work under the guidelines given and will not cheat, or lie about their work.

UVA’s honor code extends of the classroom as well. Student interactions are influenced heavily by the honor code. The students told me the honesty policy allows them to enjoy a peace of mind in knowing that other students on campus will treat them fairly. Teachers often hand out at-home assignments when holidays and major school events are being held at the school, to allow them more flexibility in getting the assignments done. They also expressed how it was nice to feel comfortable traveling around campus after dark and not having to worry about their cars or on-campus residences being broken into or vandalized.

Honor Given Until the End

It is rare that any student breaks the honor code, but the honor committee still upholds the honesty policy even when facing a potential policy breaker. Since breaking a policy is usually an expellable offense, students are given due-process with a committee of student jurors. These students on the jury are of course bound by the honor code and will give any potential policy violator a fair trial. Potential policy violators are often allowed to admit their guilt for a lesser sentence (such as suspension) rather than being permanently expelled from the campus if they are found guilty without admitted.

UVA’s honestly policy is a model that would be beneficial to other schools, including high schools, because it fosters a sense of trust, respect, and optimism that resonates throughout the entire community. Teachers and students, who adhere to an honesty policy, treat one another with much more respect and courtesy than those who do not adhere. It creates bonds and friendships that are built on solid foundations of honesty and integrity. It would also better prepare high school students for entering college; as they would already be accustomed to following an honor code based on honesty.

Finally, consider this call to action…