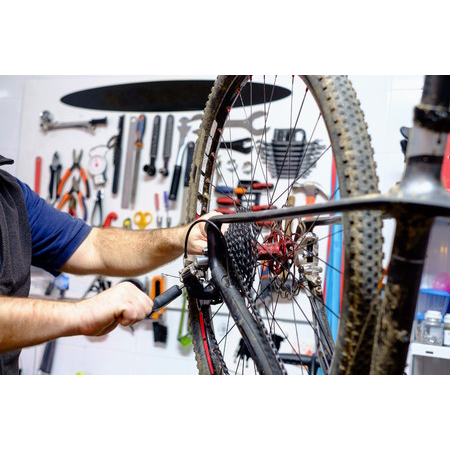 26 May In article posts by Inspire Conversation Tags: Giving Back (contribution & community)

Acting in a kind manner and performing good deeds or acts of charity are commendable and praiseworthy. But what if you can perform good deeds that lead to more acts of kindness? That would be impressive. Mick Polly serves as a great example that shows the impact that one good deed could have. One day when Polly was working in his garage, a boy with a broken bicycle stopped by to ask Polly if he could help repair the bike. Polly agreed to fix the boy’s bike, and even offered to fix the boy’s brother’s bike and build a new bike for the boy’s sister. Before he knew it, children from across his neighborhood were coming to Polly for bike repairs.

Shortly after his first bike repair, Polly decided to assemble bikes for children who could not afford them. Polly gathered old and worn out bikes and, with the still useable parts from the old bikes, began to construct brand new bikes. Polly began distributing these bikes to children in his community who were not able to afford them, and has so far constructed and donated over 700 bicycles

Polly repairs and donates these bicycles free of charge, but has two conditions that each child much agree to. Polly and the children make a deal that if they receive a bicycle, they need to “mind whoever is raising them” and try their best in school.

Polly says that one of the reasons that he builds these bicycles and gives them away is to motivate children to get up from the couch and explore the outdoors. He wants children to enjoy nature and believes that giving them bicycles will give them the ability to do so in a fun and exciting way. The lesson that we can learn from Polly’s story is to try to maximize the potential of every act of kindness. We commend Polly for the great work that he is doing and for the impact that he is making on the lives of so many children.