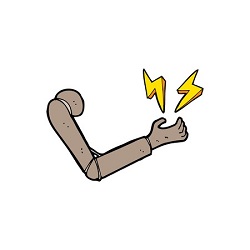 Stories of charity and of people giving back serve not only to give us examples to emulate, but have a chance to brighten our day with positive feelings. Tempering serious and important issues we discuss with our children with positive examples and good natured actions allows us to instill a sense of balance in our children. Today we share a great story (and video) that helps to break up tougher stories with a happy lesson.

Seven year old Alex was born with a partially developed arm. It prevents him from having full use of his right side, and the expense of traditional prosthetics has stood in the way of Alex’s ability to enjoy some of the activities that others his age do. Luckily for Alex, his favorite superhero was poised to come in and save the day.

On the heels of the Iron Man 3 movie debut, Robert Downey Junior, aka “Tony Stark” stepped up to make a wonderful gift to young Alex. The boy was led to a hotel room by his parents, unsure of what he would encounter when he walked in. To his surprise, his favorite comic book and big screen hero was waiting for him with an amazing gift.

“Iron Man” himself presented Alex with a prosthetic arm, modeled after the Iron Man costume from the films. The bionic arm will allow Alex to make normal use of his right arm, and the envy of all his friends.

The arm was created by Alberto Manero, an engineer and scholar who helps to build and donate low-cost prosthetic limbs to children around the world. Making use of newly available and highly effective 3D printing technology, the limbs are capable of having high levels of function and very cool designs, while still remaining affordable. These 3D printed limbs can cost as little as $350 to create, while traditional prosthetics can run as high as $40,000. This is a great example of technology making life better, and those who make use of emerging science for charitable ends.

Here is a great video of the touching scene between Alex and his favorite superhero:

Manero’s company is called “Limbitless” and is part of the #CollectiveProject. Follow the links to learn more about their work.

We encourage you to watch this video as a family, and share about it together, as well as pass it along to others who might be inspired by it. These are the sorts of stories we should be paying attention to, spreading their positive message throughout the world and allowing them to inspire us to our own acts of charity.