Basketball is a great sport, but recently, a group of Jewish teens took the sport to an entirely higher level, using the game to bridge the gap between two very different socio-economic classes with excellent results. 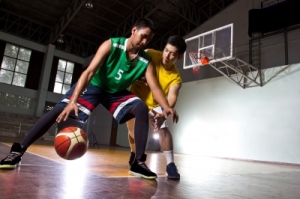 An article in the Jewish Week called “Two Worlds, One Court” gave many teens and adults alike a lot to think about. The group of boys discussed in the article come from two very different backgrounds and would not seem to have anything in common, but the efforts shown by the teens were both moving and very impressive.

Basketball is the bridge that brought both groups of boys together. As part of their bar mitzvah community outreach efforts the privileged youth decided to spend time playing basketball with the less fortunate youth from the center, and the results were great.  In the world today, teens sometimes lack compassion and a sense of community involvement, but the boys in this story are examples that stand out.

Building a Bridge Through Basketball

The Mitzvah and Milestonesprogram helped make these basketball games possible. Synagogues have started requiring community service so that young men realize how lucky they are and they work to make a difference in their communities with those who are less fortunate. The program allows donors to provide financial contributions to worthy organizations and they also get the option of volunteering with their designated organization as well.

Some of the boys involved in the Chappaqua based basketball program described in the news story come from privileged backgrounds. The rest are residents at the J.M. Goldsmith Center, which is a mental health facility for troubled adolescents. Many of the teens at the facility come from broken homes and some from psychiatric wards.

What started out as a community service effort by the Chappaqua boys as part of their bar mitzvah project has turned into something much more.

Inspiration on the Basketball Court

Many of the teens who live at the center have never known what it feels like to have parents who are supportive and nurturing; they have come to look forward to the time on the basketball court with others who actually care about them and want to help. The boys performing the community service have realized that they are lucky and ponder why they have it better than the kids that they visit. The values and compassion that they have shown is inspiring.

We would like to hear your thoughts on the Chappaqua Basketbal Program and similar programs you may have encountered/experienced.  Please leave a comment below.