Home>article posts >How One Teen Collected 566,600 Pounds of Food 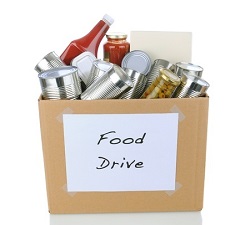 Acts of charity don’t have to be big to make an impact in the life of another person, but that doesn’t mean we shouldn’t swing for the fences! Children are never too young to get involved, and some terrific examples of giving originate with some of our youngest citizens. A recent story shows just how true this can be.

Zach Bonner of Tampa, Florida is only 16 years old, but he recently set a world record for the amount of food he raised for charity. Bonner’s efforts came as part of the #30DaysOfThanks  and Food For A Million Project campaigns, in which community members worked together to fill the world with positive acts, and to provide hunger relief for the less fortunate. Zach pulled out all the stops, setting his eyes on the world record.

The 566,600 pounds of food topped the previous record for a single food drive, but the effort wasn’t just about “winning.” To Zach, it was an opportunity to help many people across the world, and also to get that many members of his own Tampa community involved. By making charity the main event, Zach was able to make a change in the lives of the needy, while also touching the lives of those who will hopefully continue to give.

Zach himself put it best: “THANKS to the Tampa Bay community! Not only did you help break a world record, you changed lives.”

Zach is no stranger to giving back. He started his first charity organization when he was only 7 years old! Called the Little Red Wagon Foundation, founded in response to Hurricane Charlie. LRWF’s message of “kids helping kids” sought to motivate young people to get involved. According to Zach, “When the spirit of a child is combined with the knowledge and experience of an adult, great things can be accomplished.” Both children and adults have a lot to bring to the table. Charity isn’t something to delay until we get older, and the spirit of a child can do a lot to inspire others for the better.

Zach’s story has also inspired a film entitled Little Red Wagon, which tells the story of his early years and the amazing charitable contributions he has already made at such a young age. Purchases of the movie go to fund outreach and support for homeless children.

Heroes of charity play an important role, inspiring others to follow. Talk about their achievements, and hopefully more will be moved to follow in their footsteps.