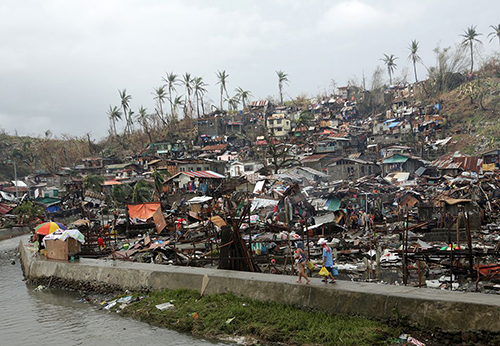 After reading last week of the tragedy and devastation Typhoon Haiyan inflicted upon a community and a nation, I felt that Inspire Conversation could help bring awareness to the need for families to join the world relief efforts. As efforts now get underway, we can see the outpouring of disaster relief and millions of dollars in aid coming not only from countries like, the US and the United Kingdom, but from aid agencies, community groups and individuals. As the proverb says, “it takes a village..,” and it will take the generosity of the entire world to help the people of Tacloban, Philippines, rebuild their lives.

“Four in 10 families in the disaster zone were living in poverty before the typhoon, according to Oxfam. Much of the affected area was dependent on the coconut trade and fishing; boats were smashed and it will take years to replace the giant palm trees wrenched from the earth.” Tania Branigan, of The Guardian, writes in her article about survivors rebuilding their lives.

Individuals Activate Their Own Social Network

Social media is playing a significant role in facilitating aid efforts. There is a high level of social media use in the Philippines which is helping both aid agencies and individuals. The western expat in this video
was able to mobilize his Facebook friends to raises money for vital supplies which he delivered himself.

MinnPost in a global post wrote, “Filipinos have converted their social media accounts into newsfeeds carrying pleas to send aid.” The article goes on to talk about the courageous nature of Filipinos who use the internet and smart phone access to send out mayday calls and list of supplies needed in disaster zones. The posts are uploaded and circulated on the web as status updates to insure no devastated community goes unnoticed.

Choose Your Way to Donate

The World Food Programme site estimates, “2.5 million people in the Philippines are in need of emergency food assistance.” There are a number of sites you can choose from to donate that will be meaningful for you and simple to do at the same time. If you love to dine out, the site Haiyan-Aid is a project by restaurants worldwide to support those affected by the Haiyan Typhoon. Go to their tweeter site where you can bid on fabulous dinners. If you’re an on-line shopper, EBay allow you to “shop to support.” The mGive Foundation enables you to text your donation of $5 and $10 to a collection of partner organization. It really is quite easy and only takes a moment for your family to demonstrate their thoughtfulness and generosity.

Personally, our family will donate through the Jewish Federation of Northern New Jersey. There are also the traditional charity organizations which you’ll find in this New York Times list plus I’ve included some below.

UNICEF, focusing on the care of children.

Habitat for Humanity is raising funds to provide Cleaning Kit to 50,000 families, Shelter Repair Kits to 30,000 families and 10,000 Core Houses – all in the affected areas