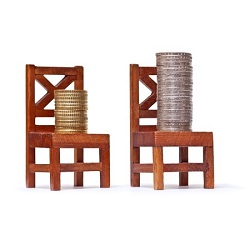 Most of us are familiar with the saying “put your money where your mouth is.” Talking about our values and our opinions is helpful and important, but it doesn’t mean as much if we aren’t ready to act when given an opportunity. Sometimes we may have to do something that makes us uncomfortable, or sacrifice something we want in order to take action for our personal values. Today we share a story about doing just that.

Kentucky has a minimum wage of $7.25 an hour. While this is an official, government established guideline, many in the state feel that an hourly rate of $10.25 an hour represents a more accurate “livable wage” – which is the amount of money one would require to live comfortably given the current economy. Kentucky State University employs many workers in minimum wage positions. They perform the “heavy lifting” of the school, cleaning halls, serving food, and performing other essential duties that keep the school running smoothly. Their jobs may not be glamorous and may not hold the same esteem as say, a professor, but the staff who perform these jobs are critical to the smooth functioning of the school.

Raising the wages of these employees from $7.25 to the more livable $10.25 an hour was simply not in the school’s budget. That is when the new interim president of the university, Mr. Raymond Burse, stepped in.

Mr. Burse volunteered to take a $90,000 a year pay cut in order to raise the wages of the lowest paid members of the university staff. He insists that the move was not a publicity stunt, and adds, “I did this for the people. This is something I’ve been thinking about from the very beginning.”

Mr. Burse makes the point that he “doesn’t need the money” and that his service as president of the university is not quite a “hobby” but rather something he does for the betterment of the school, not to make every dollar he can. In his estimation, the best thing for the school was to have a more even distribution of money, and to sacrifice part of his salary so that people he saw working very hard could receive a fair wage.

This act of selflessness on the part of Mr. Burse provides a great example of putting the needs of others ahead of our own. The idea that we might sacrifice something of our own to help others is a great and positive message. For others it may not be money – it may be taking time that we would have wanted to spend relaxing and instead, volunteering, or sharing something we wanted for ourselves so that others can enjoy.

Talk as a family about this example of charity and how you might follow its lead. Sometimes helping others means giving of ourselves, and that sometimes the needs of others need to be put ahead of the wants of ourselves.