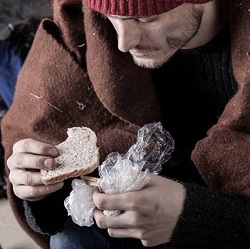 Some moments encountered in life change us forever. Today we share the story of one such moment in the life of a young woman. While some people encounter situations that inspire wonderful, charitable ideas while out in the world, thoughtful parents can create conversations that inspire the same qualities of charity and care in their children by bringing awareness to issues and teaching through the experiences of others.

Erin Dinan had her life changing moment one day when encountering a man who had nothing to eat. She shared half of her sandwich with him, and realized that there was incredible power in simple acts. That day opened her eyes to the reality of hunger in the world, and it showed her that something as simple as a sandwich really did have an impact. For Erin, both the pain and relief in that man’s eyes before and after her gift to him of half her sandwich sparked a great idea to help others like him.

Erin started her quest to combat hunger simply. She made sandwiches at home and distributed them to the poor and homeless of New York City. In time, she decided to grow her operation in order to do more. She started One Sandwich At A Time (OSAAT) as a nonprofit that has amassed an army of volunteers and corporate sponsors who help combat hunger through random acts of kindness.

Currently, OSAAT has distributed more than 30,000 sandwiches to feed the hungry – though it all started with that single act. They have since been featured on the “Today Show” as one of the most inspiring stories of 2014, and their Facebook Page tells the story of a victory in the form of 10,000 sandwiches distributed on a single day.

Erin Dinan is not the only one looking to help the needy. Minneapolis’s Allan “Sandwich Man” Law has been helping the homeless of his city for 44 years, and running the nonprofit Minneapolis Recreation Development, Inc since 1996. Law spends the hours from 9 PM to 10 AM every day driving around, offering sandwiches and support to homeless individuals. Here at InspireConversation.com, we shared the “The Powerful Example of the Homeless Bus” some time ago, yet another great story of a dedicated few making a big difference in the lives of others.

All these stories represent big charities that started with small acts. When we can form a connection with others less fortunate than us, and recognize that their struggles are real, we can position ourselves to do something about it.

Talk about these stories as a family and brainstorm ways you can help others. You don’t have to start a charity to be of service. Whether it is volunteering, donating, or finding some small way to make a difference in the lives of another person – you will change their lives (and your own) for the better.

This article is written in honor of Erin Dinan and Allan “Sandwich Man” Law. Keep up the great work!