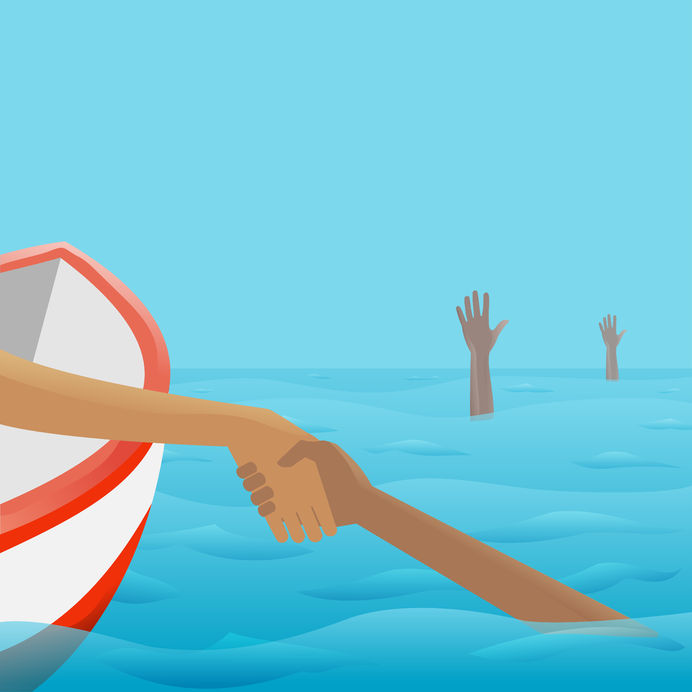 Today we share a powerful and timely story about an ongoing crisis in the world. It was inspired by a recent article, and the heroic story of one couple doing their part on the front lines. The people in this story demonstrate what it means to really commit ourselves to a life of giving back.

Anyone following the news has surely seen the tragic stories regarding migrants in the Mediterranean. Famine, war, economics, persecution, and various crises have forced many distraught communities in Africa and the Middle East to uproot themselves in search of a better life. These refugees take to the waters of the Mediterranean, and are packed into tiny, overcrowded boats. Some of these vessels are barely seaworthy. Many of the migrants are locked into cargo holds, by smugglers who falsely promise them safe crossing and a better life, to avoid detection. These opportunistic smugglers take advantage and sail with little to no concern for the migrants. Conditions are terrible enough when the sailing is smooth. When, however, tragedy strikes and a ship begins to sink, the migrants are abandoned by the crew and left to fend for themselves, with little hope of survival.

In 2014, an estimated 219,000 refugees from Syria and sub-Saharan Africa boarded such boats bound for a new life in Europe. While hard numbers on how many have actually perished are difficult to acquire, conservative estimates place such deaths in the thousands.

One man is looking to change this situation, and his story is an inspiring one. Christopher Catrambone is a self-made millionaire from Louisiana. In 2013, he donated $8 million of his own money to create Migrant Offshore Aid Station (MOAS). This organization looks to help refugees, by taking to the seas and rescuing at-risk ships in order to ferry the migrants to safe harbor in Italy (the closest country that will allow them in) in order to seek political asylum.

MOAS employs a small fleet of ships, including the MV Phoenix. These well equipped vessels make use of drone scouts that help them to locate boats carrying migrants across the sea. In 2014, Mr. Catrambone spent 2 months on board the Phoenix. During that 2 month stint in 2014, the Phoenix rescued nearly 3,000 at-risk refugees. By August of 2015, the year-to-date number of sea rescues had reached almost 9,000.

Mr. Catrambone’s wife is also actively involved in the venture. For the 6 month 2015 rescue “season” she is the one taking the lead in shipboard operations. Regina Egla Catrambone currently leads a team onboard the Phoenix that consists of a captain and crew, doctors, nurses, and logisticians from Doctors Without Borders, pilots and an engineer for the drones, as well as a search and rescue team comprised of former special operations soldiers.

With the ongoing civil war in Syria, regular acts of terror in Somalia, Nigeria, and Mali, as well as economic turmoil in places like Bangladesh – this refugee crisis continues to spiral out of control. Some people believe that we could see as many as 250,000 people taking their lives in their hands in the calendar year of 2015, as migrants pile onto fishing vessels designed to carry a crew of 10. The UN has called it “the most lethal route in the world,” and while nations such as Italy have launched multimillion dollar rescue efforts of their own, sadly, the problem seems to be bigger than the solution. At least for now.

When constantly confronted by similar stories day in and day out, it can be easy to reach a point where we “tune out” what is going on and allow events to lose their impact on us. The suffering of these migrants, and the danger they face, are very real. With resolutions to the various conflicts that have bred the crisis seemingly a long way off, the best hope is to help those who risk the journey. We applaud individuals like Mr. and Mrs. Catrambone for their amazing efforts. Everyone doing what they can to raise awareness, or actively contributing to rescue efforts, will be the only way to reverse this terrible tide of suffering.

Mr. Catrambone has stated that his philosophy is “carpe diem,” from the Latin for “seize the day.” He says that there is no reason to wait. He sees himself as having the money, the capability, and the skills to help. By delaying efforts, he says that he would only allow more people to suffer and die. We can all learn something from this. Whatever skills we have, whatever form of service is within reach for us, we should seize the opportunity and act.

To learn more about MOAS, as well as to find ways to get involved and places to donate, visit them online at http://www.moas.eu/.

If you would like to further enhance your discussion of this article, and about helping refugee communities in special ways, we recommend our recent article “Couple Uses Wedding to Feed 4,000 Refugees.”