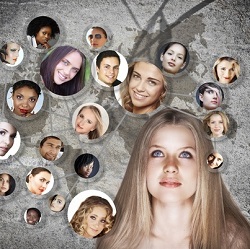 When we talk about friendships with our children, we tend to be talking about the more “traditional” notion of someone we know, spend time with, and hopefully, trust and respect. At the same time, social media and the Internet are rewriting the rules as to what the word “friend” means. A recent article in The Atlantic prompts an interesting discussion we can share with our children about the real meaning of friendship and the role of online media in our lives.

Social media platforms have altered the meaning of the word friend, as the act of “friending” and “unfriending” someone has been reduced to the click of a button. Similarly, in a world where we rack up hundreds of connections with people we have little to no regular contact with, the number of online “friends” can have little to do with our actual circles of trust and social interaction.

According to Pew research, 71% of Facebook users say that their list of “friends” includes a much wider base of acquaintances than the people those users would actually call “real life” friends. These can include classmates, friends of friends, and people met only once or twice at a social event or through an actual friend.

Some researchers say that by labeling every connection as a “friendship” online, the subtle distinctions between friends, acquaintances, and other relationships (like colleagues) tends to blur. Some argue that Facebook prolongs connections that would have naturally faded out in the real world. Is this a good thing or a bad thing in your family’s estimation?

For better or worse, the fact that nearly 70% of Facebook users report interacting with the site on a daily basis means that it holds significant power in the way we define relationships today. Can you separate online relationships from real ones? Which are more meaningful? Do you view the definitions of an online friend and a “real world” friend differently?

In an interesting twist on this discussion and the implications social media has for friendship, one photographer named Tanja Hollander embarked on an interesting project. Hollander has long been fascinated by the way we define friendship in the modern world, and set out to tackle the issue through her photography. She set out to photograph all 626 of her Facebook “friends” in person. This included casual acquaintances, people she had met through work, and old high school classmates she had not seen in 20 years.

The project, called “Are You Really My Friend?” is scheduled to open at the Massachusetts Museum of Contemporary Art in March 2017. She raised over $50,000 to fund her travels, which have taken her to 43 states, 5 countries, and roughly 150 towns or cities.

Upon setting out to start the project, Hollander was feeling a mix of emotions. She was inspired after being “struck by the dichotomy” of spending a single evening simultaneously writing a physical letter to a friend stationed overseas in Afghanistan, and a facebook message to another friend working in Indonesia. While she marveled at the way Facebook has connected her to people and faraway places she would otherwise have a hard time reaching, she thought hard about the effort involved in writing a letter as opposed to an instant message, and wondered if others like her had asked the question of whether someone would still be their “friend” if communication was not so easy.

Hollander tempered her skepticism and set out to find her “friends.” The results of her journey were just as mixed as her feelings going in. She had “friends” she had never actually met in person before welcome her into their homes and even trust her with keys to their home. Others never responded to her, and became “unfriended” individuals that confirmed her beliefs about the nature of certain online relationships.

The project is fascinating and asks many important questions about how we prioritize our time, and what matters to us in life. Teaching our children about relationships should include knowledge about what makes a meaningful connection, and how to seek both the giving and receiving of respect from another human. This discussion of online “friendships” can be an opportunity for your family to talk about what matters most, and for you to share with your children about the meaningful relationships in your life, what has made them matter so much, and how they might seek the same for themselves.