Home>article posts >The Incredible Story of One Greek Island and its Heroes – 71 Years Later! 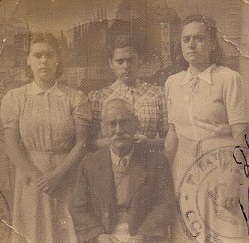 The Incredible Story of One Greek Island and its Heroes – 71 Years Later!

Today we share a story from history which is moving, inspiring, fascinating, and touching – the Secret of Ereikoussa. This story teaches us all a powerful and valuable lesson based on self-sacrifice and courage.

During World War II, the Nazis invaded the small Greek island of Corfu. Almost all of the Jewish residents there were rounded up and transported to the notorious death camp of Auschwitz to be murdered. However, a Jewish tailor named Savvas had customers and acquaintances on the nearby island of Ereikoussa. He managed to escape there with his three daughters (Spera, Julia, and Nina) and a relative named Rosa.

The phenomenal part of the story is the way the residents of Ereikoussa united around Savvas, his three daughters and Rosa. They provided a safe place for them to live and kept their presence hidden, even though doing so put the lives of everyone on the island at risk from the Nazis. This story shows the power of a community coming together, and their selfless act saved five lives that could not have continued without the dedication and commitment of strangers.

As if all this were not enough, the “Secret of Ereikoussa ” has been so called because the full details of the story were almost lost to history. An Emmy Award winning writer, named Yvette Manessis Corporon published her award winning book “When the Cypress Whispers,” which features stories of her grandmother, a resident of Ereikoussa. While Ms. Manessis Corporon was performing research for her book, she felt compelled to fill in gaps in the story her grandmother had told her long ago, the story of Savvas and the four girls. Through the help of genealogical researchers and others, Ms. Manessis Corporon was able to track down descendants of some of Savvas’ daughters. This included two brothers living in Israel who were never allowed to ask about their grandmother’s past, and knew nothing about the generosity of the residents of the island of Ereikoussa that made her survival possible.

This amazing story is told in detail through a story in Ynet, as well as through a video on MyHeritage.com.

MyHeritage.com also published a fantastic article about descendants of the girls, who live in both the United States and Israel, who came together on the island of Ereikoussa  to pay homage to the brave and selfless residents who helped to save their family.

Finally, the International Raoul Wallenberg Foundation recently unveiled what they named the House of Life plaque at the Museum of Ereikoussa. The plaque is a symbol of the islanders who gave so much (at great risk) to help Savvas and the girls. The group spent most of their time living in the home of a local priest, Father Andronikos, though they switched houses often, especially when German soldiers or Nazi spies came to the island. The “joint spirit of civic solidarity” has been honored and remembered both on the island of Ereikoussa and beyond.

The survival of Savvas, Spera, Julia, Nina, and Rosa, the reunion of their descendants, and the honoring of the islanders who made their escape possible, are heartwarming tales of service and hope. They show the power of good triumphing over evil, and the potential of a community united to fight hatred.

We at www.inspireconversation.com would also like to dedicate this article to the islanders who saved Savvas, Spera, Julia, Nina and Rose, as well as to the Association of Friends of Greek Jewry, and its president Marcia Ikonomopoulos, a woman with tremendous passion, who has dedicated her life to telling the untold stories of Greek Jews. The ceremony and reunion on Ereikoussa  would not have happened without the support of the Association of Friends of Greek Jewry and Marcia Ikonomopoulos. You can find information about the association at http://www.kkjsm.org/

If you valued your discussion of this article, we recommend our recent piece, “The Power of Legacy.”

Israel Savvas and his daughters Spera, Julia, and Nina 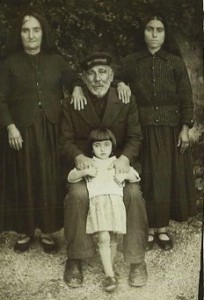 Family of Yvette Corporon-Manessis: her great grandparents, and grandmother Avgerini on the right, together with her aunt Agatha (age 7 years old). This photo was taken around the time of the German occupation when they all helped hide the Savvas family and Rosa. Agatha was beaten by a Nazi soldier for not saying Heil Hitler.