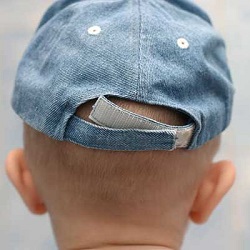 Acts of compassion for others around us go a long way. They can be big or small, planned or spontaneous, but when we act selflessly on behalf of another the result is always the same – we improve the lives of those around us and in turn, our own.

9-year-old Kamryn Renfro of Colorado knows a thing or two about doing what she can for others. When one of her friends was diagnosed with cancer and began to lose her hair as a result of her chemotherapy treatments, Kamryn decided she would do her best to make her friend feel less insecure. Kamryn asked her mother if she could shave her head to look just like her cancer-stricken friend, in order to show support and help her feel less different.

Kamryn’s friend said that she had been teased after her chemotherapy treatments caused her to lose her hair. “People would call me a boy sometimes. They would give me dirty looks and stare at me all the time,” she said.

Kamryn had to overcome a significant hurdle before she was able to implement her kind and sympathetic plan of shaving her head. The trouble was that Caprock Academy, where Kamryn goes to school, has a strict dress code. The charter school does not allow students to have shaved heads. Because Kamryn’s did not have a medical issue herself, her head shaving was mistaken for an act of youthful rebellion instead of a touching gesture. She was suspended from school.

Kamryn’s mother, Jamie Renfro, took to social media with her outrage over what she saw as an unjust suspension. Through Facebook, she launched a campaign to explain to other parents the frustration she was feeling. As Mrs. Renfro put it, “I have to wake up a little girl tomorrow who was excited to go to school and talk to her peers about what she had done and why.”

Fortunately, the school decided to reexamine the strict dress code. After a brief suspension for her shaved head, the school board met and voted 3-1 to allow Kamryn to go back to school.

There is a touching video that shares Kamryn’s story. We encourage all of you to watch it together:

“I was kind of taken aback that at such a young age she wanted to do something so bold,” said Wendy Campbell, the mother of Kamryn’s friend with cancer. It seems most were shocked that such a young girl could have so much empathy. It forced the school to take a look at their policies and procedures, and at least in this case, one 9 year old girl taught her school and so many others a huge lesson!We are never too young or too anything to show that we care. By asking her parent’s permission and doing what she felt was right by shaving her head, Kamryn Renfro demonstrated that when we come from a place of compassion, even if everyone doesn’t understand what we are doing right away, we are able to make our mark on those around us. Kamryn may have thought that she was simply helping her friend feel less alone, but in the end she has taught a valuable lesson to so many more.