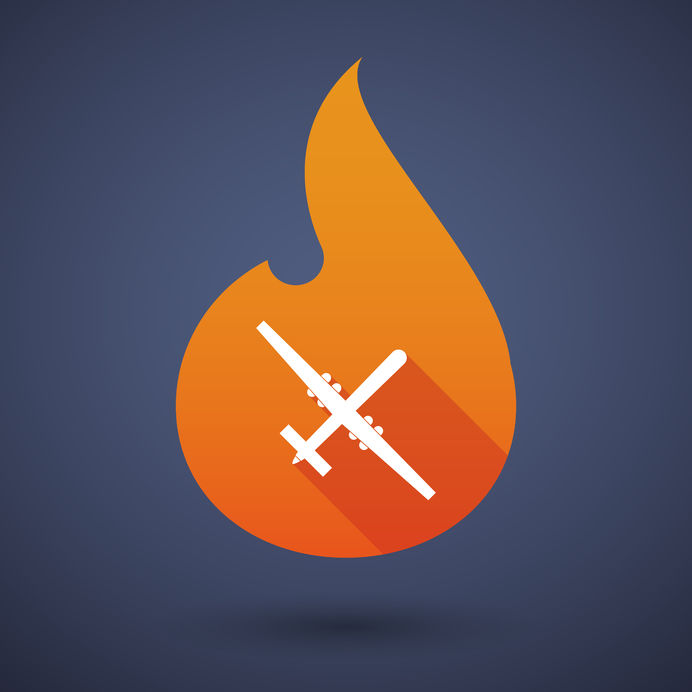 Drones Cause Danger in California Fires

A recent story out of California shows yet another danger related to the ever expanding use of drones by ordinary people. The story brings together several issues that we have recently discussed on the site, from the California drought and related concerns, to the use of new technology, and the pursuit of fame over concerns for safety. It seems as though the expanding use of technology is bringing together previously unrelated issues, and showing us just how interconnected our world can be. These new connections demonstrate that we must put some thought into how we can, and should, use technology when it comes to these issues.

Four years of ongoing drought in California have resulted in desperately arid conditions, as sun scorched forests and fields have been effectively converted into massive tinder boxes, ready to ignite at the slightest spark. While it is natural for occasional forest fires to clear out dead growth from time to time, this regular house cleaning has become a year round threat.

As the fires have become more common, the effort to fight and control them has grown more desperate. The dangerous work of fighting forest fires, which often take place far away from the most typical sources of water used to combat their spread, often involves incredible resources. One common technique is to fly planes overhead and actually dump loads of water or a fire retardant from the sky. Brave men and women risk their lives to stop these blazes and keep the surrounding areas safe.

The actions of fighting fires on such a scale is also an incredible visual spectacle, and this is where the latest problems have arisen. The massive blazes themselves, often spanning acres of forest at a time, are incredible to behold. The low flying planes dumping chemicals to put them out, and firefighters on the ground, also make for some unbelieveable viewing, and amateur drone operators are starting to catch on.

With the relatively low cost of drone vehicles and mobile cameras, many drone operators have taken to flying drones around these fires in search of great footage. Some seek Internet fame in the form of YouTube channels dedicated to the fires and those who fight them, or footage they believe they can sell to a news station, while others simply enjoy the thrill of flying as close to they can to the action without losing control.

In many instances, firefighting operations have had to stop or have been delayed out of concerns for safety. Drones can get in the way of a planned water or chemical dump, and in the worst case scenario can actually cause a firefighter’s plane to crash if they get in the way of an engine. Recently, many large scale firefighting operations have had to delay planned actions because of drones.

In short, the desire for personal fame and excitement is getting in the way of dangerous work. According to an official from the California Department of Forestry and Fire Protection, “Our message is simple: If you fly, we can’t.”

Regulations are currently insufficient to prevent people from flying their drones near the fires. The California legislature is considering criminal prosecutions of people caught using a drone during a fire, and on the federal level considerations are being made to require drone registration numbers, which would make it easier to track down and punish unsafe operators.

While this new legal action would be helpful, the message of common sense should still prevail. As the law catches up with technology to regulate potentially dangerous uses of this new generation of drones, we would hope the owners of such flying robots would be able to regulate their own actions. If it might put others in harm, or potentially interferes with public action, don’t do it!

To read more about drones, and the developing regulations surrounding them, we recommend our article “The FAA Establishes Guidelines for Drones.”

For more about the terrible drought in California, and another exploration of technology’s involvement in the matter, please read “Water Police? There’s an App for That.”

Finally, to further explore the issue of pursuing art, or fame, at the expense of others, see “Are Other People’s Social Media Posts “Art”? as well as “Man Films Tragedy Rather Than Help.”