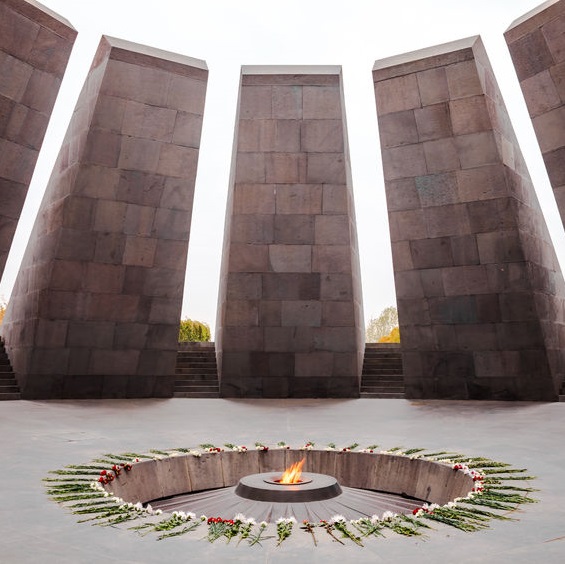 Reflecting on the Armenian Genocide

During World War I, nearly 1.5 million Armenians were killed. This year, 2015, marks the 100th anniversary of the tragedy on April 24th. This is largely held to be the starting date of the horrible events, as 250 intellectuals and community leaders from within the Ottoman Armenian population were rounded up and arrested.

The horror that unfolded after these arrests took place both during and after World War I, and was an attempt to systematically eliminate this entire group of people, within parameters legally sanctioned by the Ottoman rulers of the time.

Many claim that there was no premeditation in the killing of Armenians and other ethnic groups within what is now Turkey. The use of the word genocide is contested, and some openly deny that any organized wrongdoing took place. According to The Week, when Pope Francis referred to the tragedy as “the first genocide of the 20th century,” Turkey recalled its Vatican envoy and issued stern warnings to the religious leader.

According to the New York Times, “to Turks, what happened in 1915 was, at most, just one more messy piece of a very messy war that spelled the end of a once-powerful empire. [The Turks] reject the conclusions of historians and the term genocide, saying there was no premeditation in the deaths, no systematic attempt to destroy a people. Indeed, in Turkey today it remains a crime — “insulting Turkishness” — to even raise the issue of what happened to the Armenians.”

According to the New York Times, last year, “for the first time, the Turkish government offered condolences to the descendants of Armenians who were killed by the Ottoman Army in 1915. But it stood by its official position that the events were not a genocide. The office of Prime Minister Recep Tayyip Erdogan posted a statement  [which] encouraged people to talk about and remember their losses [and stated that] it is with this hope and belief that we wish that the Armenians who lost their lives in the context of the early 20th century rest in peace, and we convey our condolences to their grandchildren,” the statement said.” According to the article, Mr. Erdogan stated that “the Armenian diaspora is trying to instill hatred against Turkey through a worldwide campaign on genocide claims ahead of the centennial anniversary of 1915.”

Our view at InspireConversation.com, is that it is important to talk about this terrible history not for the purpose of instilling hate, but quite the opposite- to teach against hate of all forms, to acknowledge the evil that occurred, and to learn from the events to avoid events like this happening in the future.

As philosopher George Santayana said, “those who cannot remember the past are condemned to repeat it.” – only by remembering the tragedies of the past, and teaching our children about it, can we hope to prevent such atrocities in the future. Though it may not be easy to discuss killing on such a large scale with our teens, it honors those who have suffered and helps us to fight against hate in all forms.

Families should  take this opportunity to learn about other genocides from the past. The Holocaust was a nadir for human society, and one of the worst crimes in human history. The modern era has seen many other genocides, including those in Rwanda, Cambodia and Ethiopia, just to name a few. While they may not be easy for us to talk about, we must teach about and learn from them, in order to make our shared future better.

It is also important to note that out of tragedy come stories of heroism, morality and the great acts of those who stand for what is right. Even a genocide, in which many people commit untold numbers of horrible acts, there are others who show us the best of humanity with stories of lives saved and defiance of evil deeds. Over the coming months, we will try to share some of these with you – watch our site for these stories.

Today we honor and remember those who have passed at the hands of tyrants and oppressors, and hope that our teens may learn from the worst in history, in order to be the best for our future.